by Richard B. Gartner, Ph.D. 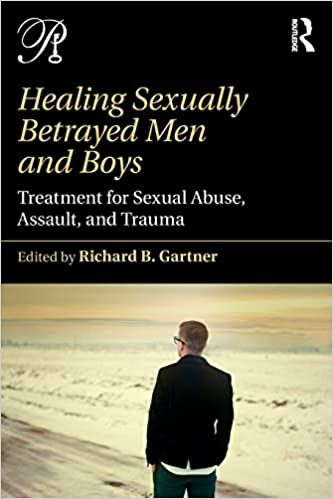 This is a remarkable book and an important read for those of us who work with boys and men who have experienced sexual trauma. It brings together twenty-one trauma experts to address a range of issues that, together, help us better understand the broad impact that childhood sexual abuse (CSA) and sexual assault have on males. Clinical vignettes serve as powerful teaching tools to illustrate how trauma is expressed at different junctures in healing.

In each chapter we are reminded of the common societal belief associated with male sexual abuse and the one which most complicates men’s healing.  It is the belief that men cannot be sexual victims, the premise of Male Rape Myth. Simply put, it assumes that men should be able to fight back and protect themselves. As clinicians specializing in trauma, we often see that the deep shame exhibited by male sexual abuse survivors is often in large part due to the inability to fight off the perpetrator – to somehow prevent the assault.  Male shame over sexual victimization is a hallmark throughout Gartner’s thoughtfully edited book.

We learn that a staggering number of men are sexually assaulted in the Armed Forces. The shame that victims experience is intensified by the hyper-masculine culture of the military. Veterans’ recovery from Military Sexual Abuse (MSA) is complicated. Start with the trauma of sexual assault and add the factor that your perpetrator is higher in command than you, and the person to whom you would report an assault. Or consider having multiple perpetrators with whom you must share sleeping quarters.  Hazing rituals and homophobia make it difficult to report abuse, contributing to feelings of helplessness, shame, self-blame, and anger.

We read about “Weekend of Recovery” retreats where men begin to feel safe around other men and share their abuse experiences. A model for retreats is outlined and the reader gets a sense of how powerful and healing it can be for men to have the opportunity to speak about their trauma and lessen their shame when they can feel compassion for other male abuse survivors.

The sexual assault of men is highly under-reported. While reading this book, we see more clearly the history of not talking about male sexual assault. It is difficult for our society to accept that men can be victims. Nowhere was this more apparent than in Rick Goodwin’s chapter on the demise of a Canadian trauma organization which focused on providing services to male sexual abuse survivors.

We know that male sexual trauma can lead to shame, confusion, secrecy and self-blame – all of which can result in attempts to numb these intolerable feelings. It is so important that Gartner included a chapter on PTSD as a psychiatric co-morbidity to substance abuse. It helps us understand the delicate balance of discussing sexual victimization while in recovery and how not numbing trauma memories leaves survivors vulnerable to relapse.

The chapters on sexual abuse of young boys and covert seduction (rarely discussed), help us further comprehend the antecedents of trauma behaviors in males. Powerful therapy vignettes could be especially useful to beginning child trauma therapists; to help them learn about changing self-states, traumatic reenactment, and attachment issues. Concluding chapters on dual histories of being a victim and a perpetrator help us not to vilify these men, but to better understand the challenges involved with treating them.

As a clinician working with boys and men who have experienced sexual trauma, this was the first book I have read that covered the many intricacies of working with this population. Gartner includes the entire constellation of working with male survivors. We read about them in the context of childhood, community, intimate relationships, therapeutic groups, and the military. I would have welcomed the addition of a chapter on clergy abuse, which is lacking sufficient recognition in the male sexual trauma literature.

Lastly, the brief but powerful chapter “The Heart of the Matter” written by Mikele Rauch, a female therapist who works with male survivors, expertly captured the push-pull of doing trauma work with men. The process of a female therapist and a male patient achieving a sense of safety in a therapeutic relationship, while traversing the patient’s vulnerability, shame, sadness, and anger, is the most authentic account of working with betrayed men that I have read.

Dr. Lisa Y. Livshin is a licensed psychologist in Massachusetts and Florida who specializes in the evaluation and treatment of trauma. In addition to private practice, she serves as a legal consultant on sexual trauma cases. Since 2006, she has been on theSteering Committee of the Massachusetts Disaster Resource Network and is currently the Boston Metro Region Team Liaison. Her prior experience includes 27 years as a trained and certified American Red Cross disaster mental health provider. From 2011-2014,

she was an Adjunct Professor of Psychology at Lesley University Graduate School of Psychology where she taught Disaster Mental Health and Community Crisis Intervention. Since 1987, she has been a Clinical Instructor in Psychiatry at Tufts University School of Medicine.

Book Review: Exploring the Landscape of the Mind: An Introduction to Psychodynamic Therapy